Intelligence For Your Life - Your Dog Can Tell Time!

Your Dog Can Tell Time!

How does your dog know when you’re coming home or that it’s dinner time? 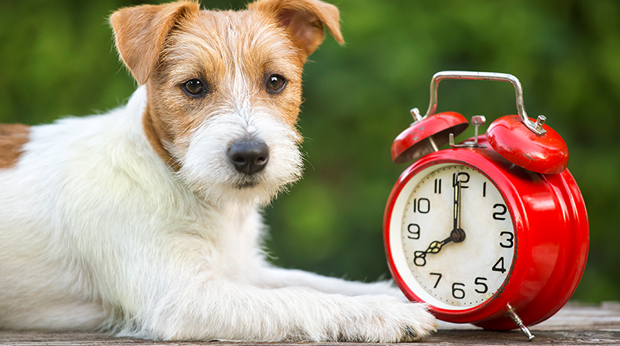 If you’ve ever thought your dog could tell time, you’re right!

New evidence from Northwestern University suggests that animals have a clear sense of time. It comes from a part of the brain associated with memory and navigation and functions as a sort of “internal clock.” It’s the same brain function humans have - and cats, monkeys and mice have it, too. In fact, the Northwestern study was conducted on mice. They had them do a trick and then after completing it, the mice waited 6 seconds for a treat. After repeating the test several times - the researchers then stopped giving the treat. But the mice still waited exactly 6 seconds for it, time and time again.

And this study is more than just proof that your dog knows when you come home late - or when he’s supposed to get dinner. The research could also have an impact on humans. Because the part of the brain that houses our internal clock is one of the first things to be affected by Alzheimer’s disease. It makes it difficult for people with Alzheimer’s to know if 2 hours have passed - or 12 hours. 2 days or 2 weeks. And in the future, clinicians could ask patients to estimate different amounts of elapsed time as part of the testing for early signs of dementia.