You Can Now Get Prosthetic Limbs for Your Pets

Most of us would do anything to help our pets if they needed medical care. Vets are getting more and more sophisticated in the… 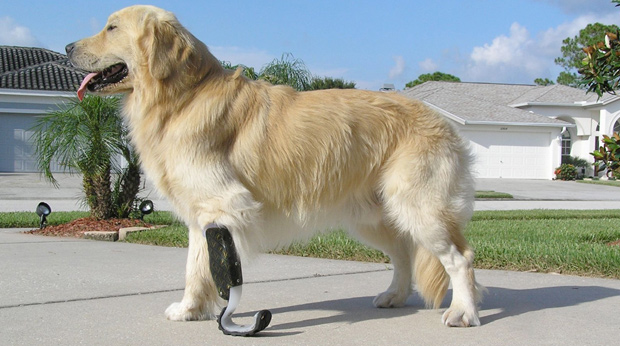 Most of us would do anything to help our pets if they needed medical care. Vets are getting more and more sophisticated in the treatments they give animals. A few years ago, when a dog got cancer it was over. Now we’ve got MRI machines and radiation treatments for animals, and the medical miracles keep on coming. About six years ago, Martin Kauffman was building human prosthetics in Salt Lake City. Then a relative’s dog had a stroke and was left with a totally useless front leg. The vet recommended amputating the leg, but Kauffman had other ideas. He constructed a brace for the dog that allowed it to run and play normally. After that, he started to think about building actual prosthetic limbs for animals. So he and his wife set up shop in their basement and called the company OrthoPets. A few years later they were able to quit their day jobs and make prosthetic devices for animals full time.

The goal of OrthoPets is to help animals stay active and pain free after an injury or an illness, like in the case of Chance. Chance is about six now, but when he was a tiny puppy, growing up in a puppy mill, another dog chewed off his foot. The breeder just tossed Chance into a dumpster. That’s where Randy Rader of Colorado found him. For years Chance hobbled around on a stump until Randy found out about the new prosthetics and bought one for about $800. Now Chance can use the footless leg normally, and Randy says the first time he saw Chance run on it brought tears to his eyes. Prosthetics are helping injured and sick animals live pain free, and avoid expensive and risky operations. It's not just for dogs. Kauffman says he’s also made prosthetics for a llama, a turkey buzzard, sheep, goats, cows and even an orangutan! If you want to see how the prosthetics work check out OrthoPets.com.