If you're a fan of NASCAR, you're familiar with advertisements plastered all over cars. Well guess what: You... 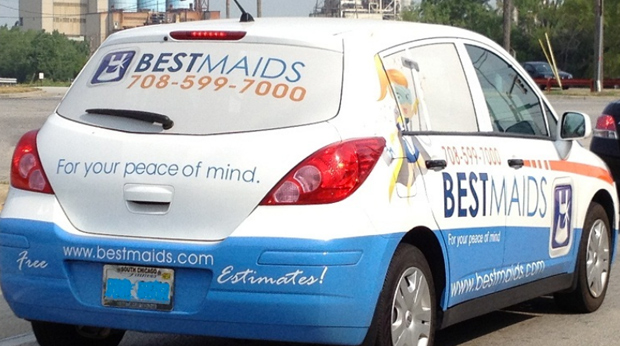 If you’re a fan of NASCAR, you’re familiar with advertisements plastered all over cars. Well guess what: You don’t have to be Dale Earnhardt Jr. to get paid to put ads on your wheels! In fact, thousands of motorists have registered to have their cars and trucks wrapped in ads. Why? Because they can get up to $800 a month for their trouble - or even a free car!

According to The New York Times, vehicle wrapping started in 1993, when PepsiCo paid for the rights to put its logo on six city buses in Seattle. Instead of spending six weeks to paint the buses, they used a vinyl material that could be applied in hours. It has a removable adhesive like Post-It notes, so the vinyl strips don’t stick until pressure is applied and it won’t hurt the paint job. Since then, vinyl ads have been wrapped around racecars, helicopters, boats, planes, billboards and even buildings.

So what’s in it for the companies? Cheap advertising! It costs about $5,000 for a company to wrap your Camry in its ad, and they’ll pay you up to $800 a month. That may seem steep, but in the grand scheme of advertising, it’s a bargain, considering a single vehicle’s ad is viewed an estimated 70,000 times a day by motorists and pedestrians.

Generally, your car qualifies if it’s big enough for a sizable ad, and is no more than five years old. They pick drivers based on demographics. In other words, say they’re advertising laundry detergent, and you match their demographic of stay-at-home moms with kids who play sports. Your car could be wrapped in a Tide banner. You’d be instructed to park outside whenever possible, especially in places where a lot of people go, like malls, and refrain from smoking, littering or swearing in your vehicle. You’d also have to send frequent reports with photographs to show where your car has been, and avoid parking near the competition.

For example, if your car was advertising Coke, you’d be advised not to drink Pepsi behind the wheel, and not park near restaurant chains like KFC or Pizza Hut, which serve Pepsi products exclusively. Turn your car into a rolling billboard (for money!):* www.freecarmedia.com* or www.myfreecar.com