Intelligence For Your Life - Why Our Pets Act So Weird

Why Our Pets Act So Weird

It turns out, dogs have emotions similar to humans and experts say that cats aren’t too fond of humans. We’ll tell you why they act a certain way and what it has to do with their owners. 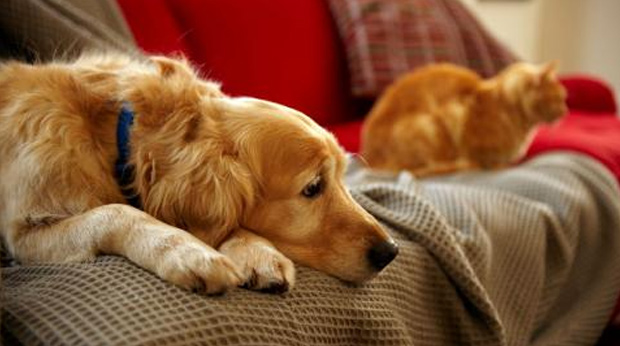 Cat lovers and dog lovers are duking it out again, over which is the better pet. That’s because two new studies recently came out, explaining animal behavior. In the first study, Dr. Gregory Berns, a neuroscientist at Emory University, trained dogs to sit still enough in an MRI machine so that he could scan their brains. And the scans showed that the emotional part of a dog’s brain lights up when their owner enters the room – or they smell a familiar person. Dr. Berns research proves that dogs have the ability to experience positive emotions, like love and attachment, in a capacity that’s similar to that of a human child. That has dog lovers really psyched – knowing that their furry best friend can feel what humans feel.

So what about cat lovers? Well, the news isn’t so hot in Mr. Whisker’s camp. The latest cat research shows that kitty stress hormones go WAY up when they’re an only cat. Why? Well, the University of Veterinary Medicine in Austria found that cats get really stressed out when their owners pet them. In fact, the doctors concluded that, essentially, cats don’t like human touch – and avoid it as much as they can. Their stress hormones only go down when there are other cats in the home – because that takes the pressure off all the cats, since there’s less one-on-one time with the dreaded human.

But cat lovers strongly disagree – and say it’s a gross generalization to say all cats are antisocial – because some are cuddly and run up to humans. Well, here’s what animal researchers know: Cats have a very small window in which they can be socialized to enjoy human touch – and that’s in the first 3 weeks of life. That’s why cats can be just fine living on their own. However, with dogs, over 14,000 years, we’ve been systematically creating an animal that responds to us. Cats came on the scene much later and humans didn’t form the same type of bond.