Intelligence For Your Life - Why Do Cats Need Their Claws?

Why Do Cats Need Their Claws?

Did you know the #1 reason people DON’T adopt cats, is because they don’t want their furniture or other belongings… 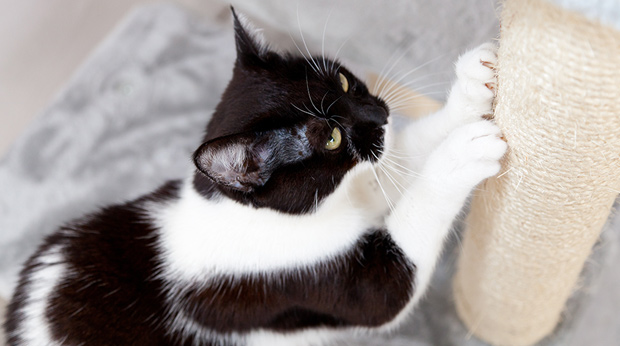 Did you know the #1 reason people DON’T adopt cats, is because they don’t want their furniture or other belongings scratched to pieces! That’s according to a recent study from Cornell University. Other reasons given: Landlords won’t rent to you unless your pet is de-clawed first and, of course, nobody wants to see their child with a big gash from cat claws. All of which leads to one solution: Either de-claw that cat, or leave it behind in the shelter – where it’ll inevitably get put to sleep. Before you go calling your vet to schedule an ONYCHECTOMY – which is a de-clawing procedure – here’s what you need to know:

So what are some alternatives to de-clawing? There’s a product called Soft Paws, that’s like Press-On Nails for your cat. They’re plastic, temporary, and they’ll render those sharp claws harmless while they’re on. You can also buy a double-sided tape called Sticky Paws. Put that on any surface you don’t want your cat grabbing onto. When all else fails, a little catnip sprinkled on an old-fashioned scratching post should help save that treasured armchair!