Intelligence For Your Life - When Disaster Strikes, Why Send In Dogs?

When Disaster Strikes, Why Send In Dogs?

No matter where disaster strikes these days, you’ll find volunteers, emergency supplies... and dogs. But have you ever wondered: Why send dogs? And not cats, or more people? 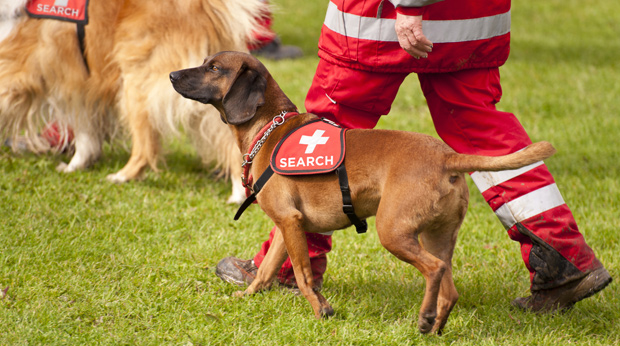 For example, teams of dogs are often sent to disaster areas from the Search Dog Foundation – to find survivors from tornados, hurricanes, and earthquakes.

And Lutheran Church Charities has been sending their comfort dogs all over - to help the survivors of the Boston bombings; the Newtown, Connecticut shooting; and the Moore, Oklahoma tornado.

But have you ever wondered: Why send dogs? And not cats, for example, or more people? For starters, experts say it’s because dogs are “super sniffers.” Research shows that a dog’s nose is 100 times more sensitive than a human’s, and they’re so good at locating human scents in a variety of terrains, that one trained dog can accomplish the search and rescue work of at least 20 people. That’s because they can sniff out the 30,000 skin cells we drop every minute!

Plus, many new studies show that - unlike other animals - dogs can empathize with humans. Consider a study in the journal Animal Cognition, which says that dogs are more likely to approach a crying person than someone who’s humming, or talking.

And they’ll do that even if the person’s a stranger.

Dogs are also more likely to yawn when they see or hear a person yawning. And according to psychologist Dr. Deborah Custance, those reactions suggest that dogs are tuned in to our emotions.

And dogs have been perfecting that skill ever since humans domesticated them 15,000 years ago. We essentially bred dogs to act as our companions. And over the years, the dogs that responded to our emotions – and obeyed our commands - were more likely to be kept as pets.

And when you combine that with the fact that dogs are proven to help lower anxiety levels, decrease blood pressure, and boost the brain chemicals associated with bonding and affection, then it’s no wonder we now turn to dogs to help us cope when disaster strikes.