Tiny Changes To Your Environment Can Completely Alter Your Eating Habits 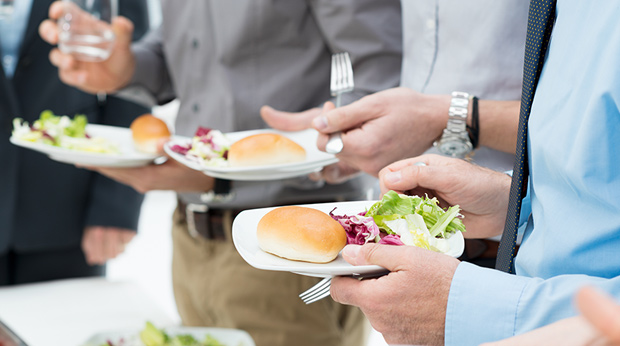 Did you know that tiny changes to your environment - even if you barely notice them - can completely change your behavior? That's the theory behind a book called Nudge - written by Richard Thaler and Cass Sunstein.

They're researchers who studied how subtle changes impact people's eating habits. It turns out that people want to be average. So, they'd rather eat the same amount of food as the other people they're eating with. They also discovered that people who think they're being watched eat less, keep the kitchen cleaner, and contribute more to the office "coffee cash" jar.

During the study, a camera was set up in the company break room, and recorded what employees ate from a catered breakfast on a flat table. The first day, they changed nothing, and employees ate a lot of donuts, and about one-quarter of a bowl of fresh fruit.

Another day, they posted tabletop signs about a study that says bagels are part of the average breakfast, and donuts are not. The result: Bagel consumption jumped, and people ate one-third fewer donuts. When a poster with eyes on it was placed beside the "coffee cash" jar in the break room - people put more money in the kitty when they took a cup of coffee, and kept the sink and microwave area cleaner.

Researchers also discovered that when they put a mirror in the break room, more donuts were left over than ever. Employees also ate more fruit than on any other day. Why? Because when people could see what they looked like when they chose their food - they chose healthier, lower-calorie fare. So, if you want to eat less at work - or at your next family party - put up a mirror, and put the healthier foods in a higher, more prominent position.