The Way We Walk Says A Lot About Our Health

What can we learn about someone’s health and wellbeing just by watching them WALK? A lot, actually. 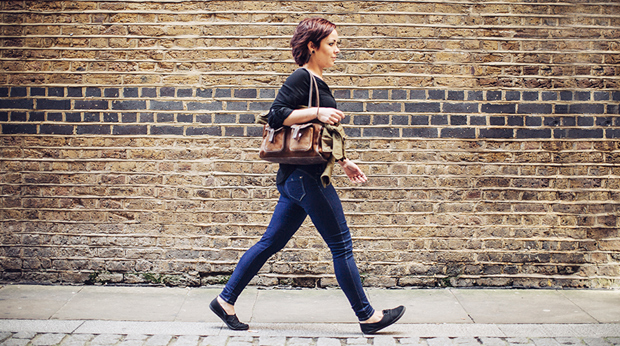 What can we learn about someone’s health and wellbeing just by watching them WALK? A lot, actually. Here are the facts:

First, the way a person walks reveals whether or not they’re a total stress-case. Just watch the way their body drifts as they walk down a hallway or sidewalk. According to a study in the journal Cognition, people under a lot of stress will veer slightly toward the LEFT, while mellower people will drift toward the RIGHT. The reason? Researchers found that anxiety is mostly processed in the brain’s right hemisphere – which controls the left side of our body. So, if a person is thinking stressful thoughts while walking, and that part of the brain “lights up” with stress, it makes us FAVOR our left side. In fact, when researchers blindfolded people who claimed to have nervous tendencies – and told them to walk in a straight line – almost all of them deviated off course to the left!

Next, you can predict someone’s dementia risk by studying their walking style. That’s the gist of a study from the Albert Einstein School of Medicine, involving about 27‑thousand adults over age 60! Researchers found that one of the earliest symptoms of dementia is a condition called Motoric Cognitive Risk syndrome – or MCR. And if you’ve ever watched an older person walk, you’ve likely seen MCR in action… It’s characterized by an unusually slow pace, and occasional confusion. Like when Grandma needs to stop every few minutes to look around, get her bearings, and remember where she’s going. According to this study, those who show signs of MCR are TWICE as likely to develop dementia in the near future, as compared to faster walkers who always move with a purpose!