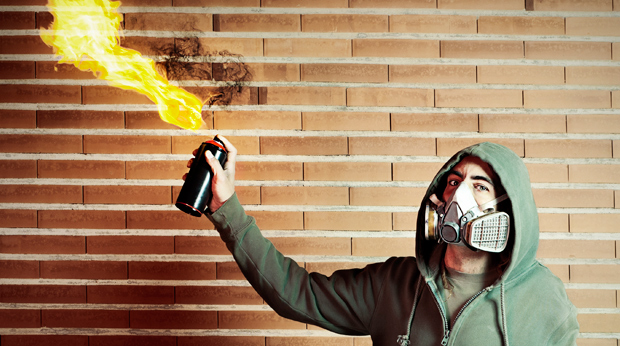 From our "are you kidding me?" files. Have you heard about the latest dangerous trend? More and more teens are turning cans of aerosol cologne into explosives and miniature flamethrowers! We won't even mention the name of the product that's being used most often, because so many kids have been critically burned - or even killed - playing around with it.

Alan Feldberg is a psychologist in Pennsylvania who deals with young arsonists. He says there's nothing new about teens using flammable household products to set things on fire. In fact, more juveniles are involved in arson than in any other crime, and 55% of arson arrests in the U.S. are committed by kids under the age of 18.

Unfortunately, the most common thing being set on fire these days is people, and some of the injuries are life-threatening. For example, a 14-year-old boy in Ontario, Canada suffered third degree burns - the most dangerous kind - after his friends sprayed his clothes with cologne and set him on fire for fun - leading to months in the hospital, and numerous skin grafts.

So, why are aerosol can fires becoming increasingly popular? For one thing, a lot more kids are wearing cologne, which means teens are more likely to have highly flammable aerosol cans in their bedrooms, backpacks and school lockers - making it easy for kids who decide it might be fun to experiment with fire.

Another factor is YouTube. There are at least 200 videos online showing teens setting fires using spray cologne as an accelerant, literally turning the cans into flamethrowers, or simply tossing the cans into bonfires, where they explode in large balls of flame. This is encouraging kids to try to "one-up" each other with increasingly dangerous stunts.

So, what's the takeaway from this? Aerosol cans and fire simply don't mix. Don't risk your life - or the life of your friends - by playing with fire. It's not worth it.