Intelligence For Your Life - The Best Cafeteria Dining Tip

If you eat at a cafeteria - or your kid does at school - here’s why you should start using a tray... 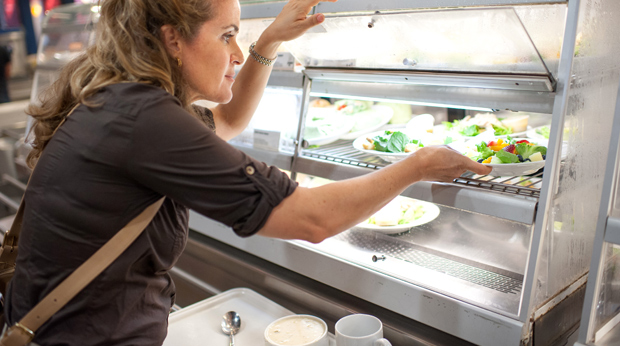 If you eat at a cafeteria - or your kid does at school - here’s why you should start using a tray: Experts say it can absolutely help you choose healthier food!

As you probably know, some schools and workplaces have gone tray-less, to save water… because they don't have to wash the trays. Going tray-less also reduces food waste – because we’re more likely to take extra food when we have a tray, versus just our bare hands.

BUT – new research is telling us that when we use a tray, we don’t just take extra food - we take HEALTHIER food. That’s according to Cornell University researchers. They found when people only had their bare hands to carry food items in a cafeteria, they took the foods they craved most - like mac-and-cheese and a dessert. But when people had trays, they still took the mac-and-cheese and dessert, but they were more likely to add a salad or a piece of fruit, too. And most people ate the salad and the fruit BEFORE moving on to the mac-and-cheese and the dessert – so, they actually got more nutrients, ate healthier, and ate less of their dessert.

Conclusion… Using a tray at the cafeteria can help you choose healthier food.