Skate Geezers Have Doubled In The Last Decade 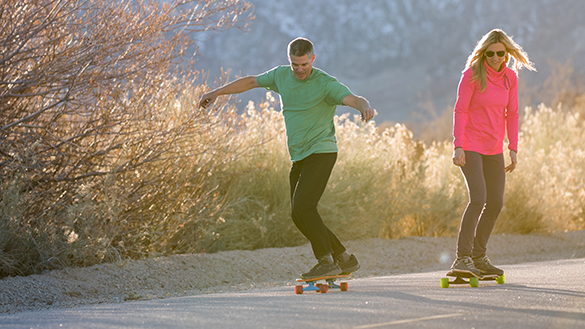 Are you a "skate geezer"? That's the term for the growing number of older men riding skateboards! According to a new survey from the National Sporting Goods Association, the number of skateboarders over age 35 has doubled in the last decade, and experts say the skate geezer trend makes sense when you consider that the sport of skateboarding itself is entering "middle age."

For example: Tony Hawk, one of the most famous skateboarding superstars, is in his late 40s, and now that guys from Hawk's generation are old enough to finish paying off mortgages, experts say many are rediscovering the sport they fell in love with as kids.

Some skate geezers say they skate to escape the stresses of work and family life, or to enjoy one last gasp of youthful rebellion! Others skate for the opportunity to bond with their kids. Of course, skate geezers are finding that skating today isn't like it was when they were younger. For example: It's no longer necessary to sneak into empty backyard swimming pools, or risk life and limb skating on city streets, because there are a growing number of skateboard parks set up for people to go skating.

Also, today's skate geezers can ride on longboards, which are described as the "luxury sedans of the skateboarding world." That's because their longer size and softer wheels make the boards more forgiving when they roll over cracks and pebbles, so you're less likely to fall and break bones, which is more likely when you're middle-aged. So, are you a skate geezer? Weigh in at facebook.com/JohnTesh.