Protect Yourself If You Swim In A Lake Or River

There's nothing like swimming in a lake, river, or the ocean on a hot summer day. Unless the water contains potentially deadly bacteria! So should you should stop swimming in places like lakes, rivers, and oceans? 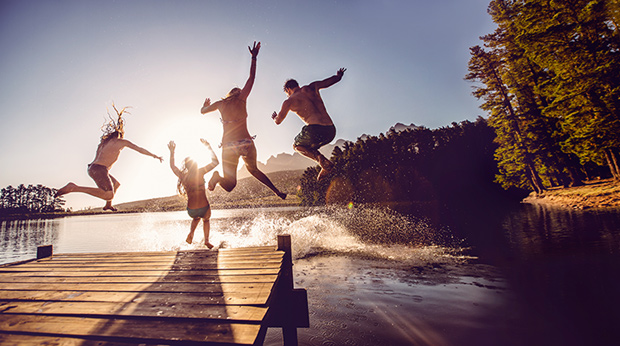 There's nothing like swimming in a lake, river, or the ocean on a hot summer day. Unless the water contains potentially deadly bacteria! It turns out, rivers, lakes, and oceans can contain bacteria that can cause everything from vomiting to potentially deadly infections.

For example, according to ABC News, a 14-year-old boy in North Carolina was fighting for his life after catching an infection while swimming in a lake. The infection was caused by a common bacteria found in lakes, and some of the boy's nose and teeth have been removed to try and fight the infection. Experts believe the teen picked up the infection through an open wound.

Another example: The potentially dangerous bacteria, cyanobacteria, was found in some of New Hampshire's lakes last year. Cyanobacteria can cause a range of symptoms from vomiting to skin rashes. Also, one study showed that potentially dangerous E. coli bacteria capable of fighting off common antibiotics were present in some state-park swimming areas in Iowa. Studies have also found MRSA in the water at beaches! MRSA is a potentially deadly staph infection.

So should you should stop swimming in places like lakes, rivers, and oceans? Not necessarily. In general, swimmers are unlikely to swallow an organism that'll survive the body's natural defenses and make them sick, and then be able fight off antibiotics, too. That's the word from Dr. Patricia Winokur of the University of Iowa's College of Medicine.

There are steps you can take to protect yourself: