Parents Are Fined for Their Children's Bad Academic Behavior 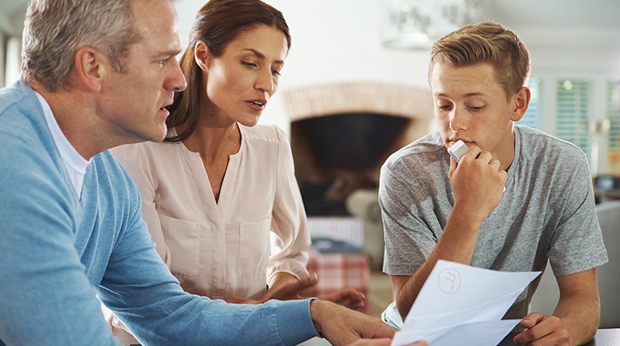 Can you imagine being on the hook for thousands of dollars worth of fines, and criminal charges for something your kids did? It's happening to more parents than ever. That's because a growing number of states are creating laws that punish parents for their children's bad academic behavior, like being late to school or skipping class. For example, Alaskan parents get a $100 fine every time their kid skips school. If kids skip in California, their parents are slapped with misdemeanor criminal charges, which could mean jail time.

So, why are schools suddenly penalizing parents for their kids' slip-ups? The goal isn't to get parents in court. It's to help get kids in school. Studies show that the more time a kid spends in class, the higher their test scores are and the less likely they'll drop out. Linda Lawson is an Indiana State Representative, and she recently introduced a bill to punish parents for their kids' bad behavior. She says up until now, teachers have been the only ones held responsible when students perform poorly, but she says that teachers can only help students when they're actually in class. Lawmakers figure if parents face severe financial and legal consequences, they'll be more motivated to help their kid excel academically.

Critics say that disciplining parents for their kids' actions could backfire. Diane Ravitch is an education historian. She says the new laws mean that parents will have to micro-manage their kids on a daily basis, preventing them from developing key life skills like responsibility, independence, and self-discipline. So instead, experts say that schools should team up with parents to help the kids, by creating more family-oriented school functions and workshops. So, parents, should you be fined and charged with a crime if your kid misbehaves? And kids, would you think twice about skipping school if it meant your parents would get into trouble?