Intelligence For Your Life - Keep Your Pet Safe While They Travel

Keep Your Pet Safe While They Travel

We’ll explain the importance of keeping your pet safe from heat stroke and how to protect them on your next airplane ride. 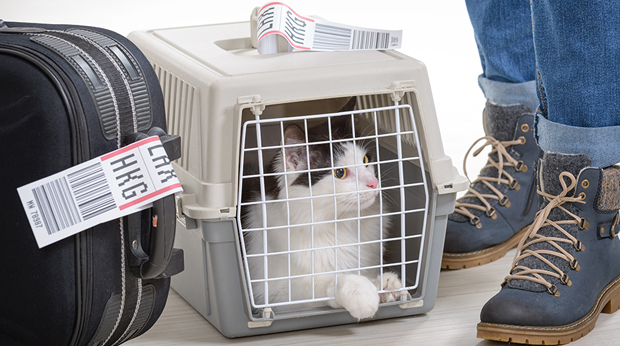 If you’re planning to fly with your dog or cat and they’re not traveling in your carry-on, you might want to change your plans because an increasing number of animals are dying on airplane flights. The two most recent cases are a golden retriever and mastiff that died on separate United Airlines flights – apparently from heat stroke.

How can that happen? Airplane cargo bays are pressurized, and they try to keep them between 50 and 70 degrees. But there’s no guarantee the animal holding areas, or the baggage carts, will stay cool. The cargo bay can heat up while the plane’s on the tarmac and, because shipping makes animals stressed, that can add to overheating. And heat’s a huge problem for dogs and cats. Dogs only have sweat glands on their footpads. They also cool off by panting, while cats lick their fur so evaporation will cool them, and resort to panting if they have to. But that’s not always enough. Flying is especially risky for animals with pushed-in faces, like pugs, bulldogs, mastiffs, and Persian cats. Experts say that snub-nose animals are more likely to overheat because they can’t breathe in enough air to cool down. Another problem? Airlines often pack suitcases and other cargo around the animal crates, which may reduce the airflow even further.

The Department of Transportation is considering requiring all airlines to report when any animal is lost, injured, or dies while being transported. That way, pet owners can make smarter shipping decisions based on an airline’s record. But the Humane Society of the United States recommends shipping your pet only if there’s no other option.