Intelligence For Your Life - How Dogs Express Love!

Watch for these body language signs! 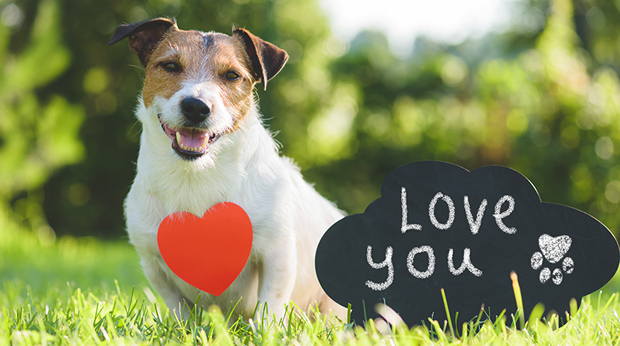 Does your dog love you? The answer is almost certainly YES… But here are a few ways dogs express their love.

Watch your dog’s eyebrows and ears. According to the Department of Animal Science at Azabu University in Japan, when dogs are happy to see you, they’ll lift their eyebrows - especially the left one - or their left ear will move back. In their study, dogs were alone in a room when either their dog parent walked in or a stranger. When the dogs saw their pet-parents, they immediately lifted their eyebrows - especially their left. When they saw a stranger there was significantly less facial movement, and if there was movement, it was the right brow or the right ear.

Another sign your dog loves you? Deep eye contact. Dr. Brian Hare founded the Canine Cognition Center at Duke University… and he says, when your dog gives you eye contact, she’s quote, “hugging you with her eyes.” Because it triggers the bonding hormone oxytocin - the same hormone that helps mothers and babies bond.

One more sign your dog loves you? He yawns when you yawn. Yawning is contagious for humans AND dogs! That mirroring is one way dogs communicate with each other and us. It’s a non-verbal way of saying “I understand you.” In a study from the University of Tokyo, dogs were more likely to yawn when their owners yawned, as opposed to a stranger. And besides primates, only two species have been shown to yawn contagiously. One of them is the dog, the other is the Australian Budgie - a type of parrot.