Intelligence For Your Life - Getting Your Kid A Pet? How ‘Bout A Rat!

Getting Your Kid A Pet? How ‘Bout A Rat!

If you’re thinking about getting a pet for your kids, you may want to forgo the traditional dog or cat... 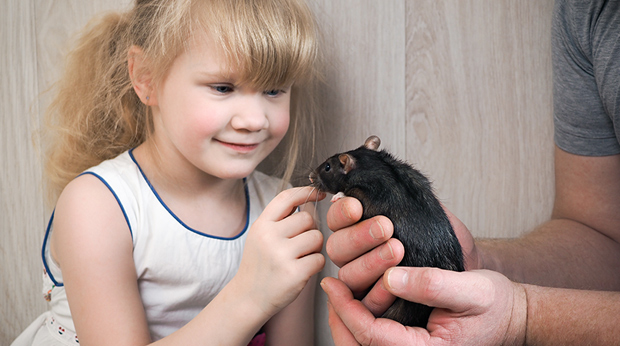 If you’re thinking about getting a pet for your kids, you may want to forgo the traditional dog or cat... and get them a RAT!

That’s according to a study conducted by RightPet, an online pet products and services review site. They surveyed nearly 17-thousand people from over 100 countries... and discovered that kids are reportedly more satisfied with a pet rat than any other animal! And the study was really extensive - it lasted 8 years! The study for that between the ages of 10 and 17, kids were more satisfied having a rat as a pet, even more so than a cat or dog. However, interest in rats as pets declined as kids got older. So why are little kids so crazy about rats? The founder of RightPet, Brett Hodges, believes it’s because rats are easy to care for, they’re smart, fun companions and are - quote - “great for freaking out your parents.”

And veterinarians say rats can make great pets because they’re smart – and can be trained to come when you call... fetch... and even use a litter box. Their intelligence is why rats are used so often used in psychological studies to help understand human behavior. Rats can learn their names and recognize their owners and respond to their sight and voice. Rats are also very cuddly... they’re social creatures and love to hang out with human family members on the couch or on peoples’ shoulders or in their laps. Rats are also super clean pets. They groom themselves constantly and if they get something on their fur, they immediately try to clean it off. But be prepared for heartbreak, because a rat’s life expectancy is only a few years.

As far as pets that bring people - kids and adults - the least amount of satisfaction, scorpions and geese were at the bottom of the list.