Frosting Shots Are The Latest Trend At Bakeries 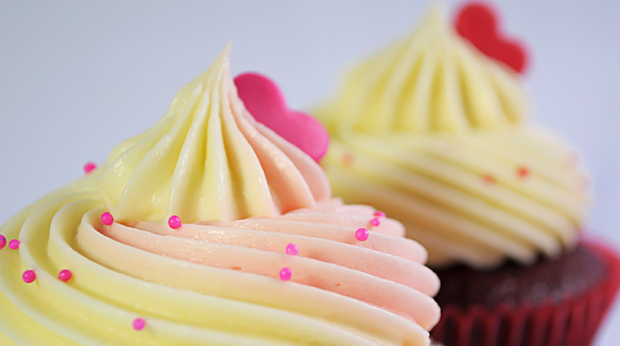 We've talked about the "cupcake craze" on the show before. How cupcakes are making a comeback because they're the ultimate comfort food - and they provide instant portion control. Well, now people are saying "Forget the cupcake! Just give me the frosting!"

According to the San Diego Union-Tribune, "frosting shots" are becoming an in-demand item at several bakeries. So what exactly is a frosting shot? For a small fee, like $.75, you get a tiny serving of your favorite frosting in a paper or plastic cup - about the size of a frozen yogurt sample. While some bakeries keep the frosting shot a strictly "must-ask-for" item, several cupcake shops have made it an official menu offering. For example, at Back in the Day Bakery in Savannah, Georgia, they offer $0.75 frosting sides for their Friday night "cupcake happy hour." At one happy hour, she sold about 100 shots! Erin McKenna - owner of BabyCakes in Manhattan - says she actually tried to stop offering frosting shots, but people kept asking for them! Now they're a permanent fixture costing $1.50 a piece and come served in vintage shot glasses.

So why are so many people fans of frosting shots? Some people order the shots so they can have extra frosting with their cake. Some parents like the idea of being able to buy "just frosting" for picky kids, and others just want a small sweet treat. One customer mentioned in the article feels it brings you back to when you used to lick the spreading knife - when Mom frosted a cake. So just like with cupcakes, frosting is a "comfort food" that reminds people of a simpler time when the only thing you worried about was who got to lick the bowl. So the next time you're ordering cupcakes at a bakery, ask if they sell frosting shots. Just so you know - a shot of butter cream frosting will set you back 110 calories - and cream cheese frosting is 145 calories for only two tablespoons.