Intelligence For Your Life - Does Your Cat Bully Your Dog?

Does Your Cat Bully Your Dog? 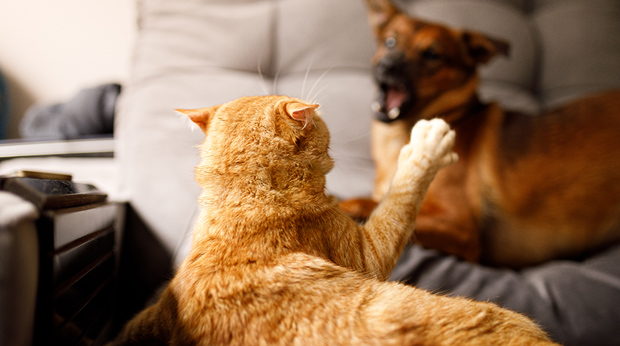 Famously in cartoons, we’ve seen dogs chasing cats, right? But a new study has found that the bully among household pets is the family CAT! That’s according to the Journal of Veterinary Behavior. In a study of homes with both a dog and cat, more than half of owners say their cat has lashed out “threateningly” at their dog.

But fewer than one in five pet owners have seen their dog pestering their cat. And even though cats are generally smaller than dogs, they pack a wallop! 10% of pet owners say their cat has injured their dog. That’s 10 times MORE than owners who say their dog has hurt their cat.

The study’s author is cognitive neuroscientist Dr. Sophie Hall… and she says, whether a dog and cat can get along in the home is really up to the cat. Dr. Hall says, the cat has to be happy and content, rather than the dog, for them to live happily together.

Dr. Hall says cats are generally less domesticated than dogs. They typically aren't trained and pretty much, do what they want. Dogs have rules to follow and that may lead them to be more submissive than cats. Finally, Dr. Hall says cats and dogs may get along better if the cat is young when they begin sharing living space. So if you’ve always thought your cat ruled the household, now you have science to back it up!