Intelligence For Your Life - Do You Share Your Bed With Your Dog?

It’s a fair question to ask when you consider studies show that HALF of all dog owners allow their pets... 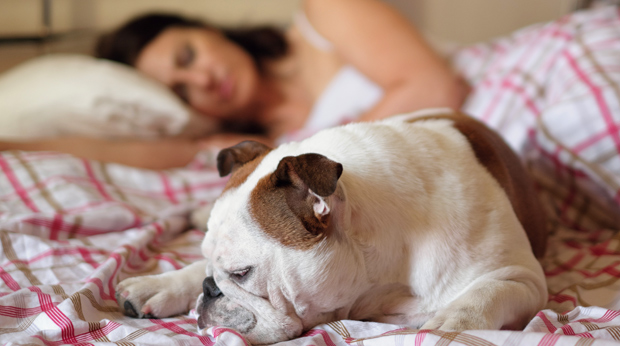 Are we wired to share our bed with dogs?

It’s a fair question to ask when you consider studies show that HALF of all dog owners allow their pets to sleep on the bed with them. That’s despite the fact that having a restless dog in bed is a proven sleep stealer… and among married couples, a survey found that 1-in-4 couples have argued over co-sleeping with their pet!

So, why do we keep risking insomnia AND even divorce to let our dogs share a snooze with us? Scientists have some theories:

First, it’s psychologically comforting. After all, dogs provide companionship when we’re lonely… and warmth when we’re cold, since the average canine body temperature is about 6 degrees Fahrenheit warmer than that of humans. Dogs also provide an early warning system against approaching predators… which means they helped us SURVIVE when we didn’t have shelter. And it explains why archaeologists have found evidence of people sharing beds with dogs going back more than 5-thousand years, to ancient Egypt!

In fact, some anthropologists think we’re biologically wired to want a pet nearby while we sleep. Because in almost every family with pets, children automatically curl up to sleep with animals – until their parents teach them NOT to. Which suggests the co-sleeping urge is encoded in both human AND doggie DNA.

One surprising twist in all the dog-dozing research is that we’re actually making it harder to sleep with dogs than at any time in history. Because, as you may have noticed, modern beds sit 30 inches off the floor, on average… which means small Pugs and Pomeranians – or older dogs with arthritis – risk injury every time they jump off the bed. Which helps explain why sales of “pet stairs,” to help animals climb into bed without jumping, rose 10 percent in the past year!