1 out of 13 combat vets suffer from Post Traumatic Stress Disorder and they’re not alone. 1 in 10 military working dogs in war zones develop the canine version of PTSD. 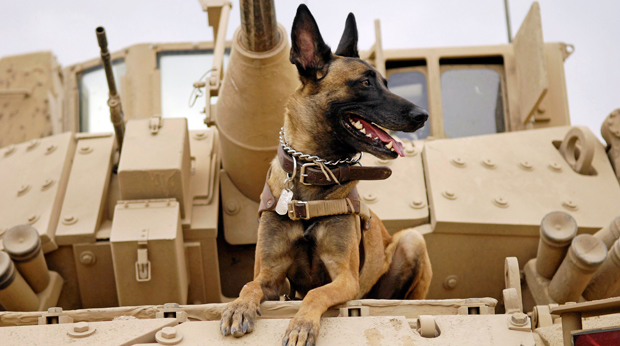 1 out of 13 combat vets suffer from Post Traumatic Stress Disorder and they’re not alone. 1 in 10 military working dogs in war zones develop the canine version of PTSD. And military dogs are crucial. They stand guard, clear buildings, and they’re the best tool for locating hidden explosives. And at the moment, more than 2500 military dogs are deployed with American forces.

Experts say that canine-PTSD is caused by long-term exposure to loud noises, constant violence and death.  It can even be brought on by the anxiety of fellow soldiers – since the dogs are trained to understand the moods of their human handlers.

And PTSD can lead to troubling behavior. Some dogs become hyper-vigilant, and won’t “stand down” even when their handler gives the proper signal. Other dogs are startled by loud noises, growl frequently, or exhibit drastic personality changes like barking nonstop, or picking fights with other military dogs. Others simply become timid, and unwilling to leave their handler’s side.

Treatment is mostly “counter-conditioning”, where trainers or veterinarians figure out what the dog dislikes, and find a way through it. Say, a dog is afraid of loud noises. They’re exposed to increasing levels of noise, and get treats and positive reinforcement each time they successfully enter a noisy space. If the dog still shows symptoms after 3 months, they’re usually retired.

But military dogs recovering from PTSD are also great teaching tools for up-and-coming handlers. Because the soldiers need to learn to work with dogs in stressful situations, before they end up in a combat zone.