Intelligence For Your Life - Churches Are Going To The Dogs!

Churches Are Going To The Dogs! 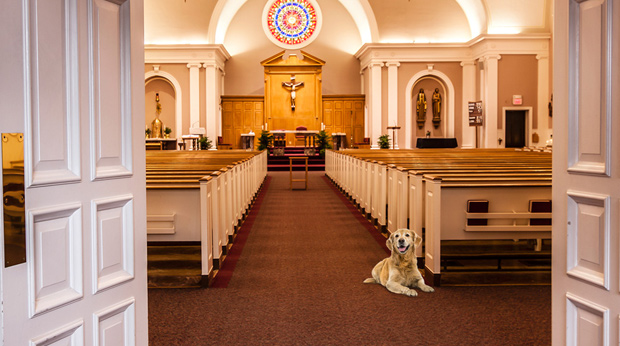 A growing number of churches are going to the dogs! The animals are officially known as "ministry dogs" - or even "pulpit pooches." They're usually service-dogs owned by faith leaders, who hang out at church each week.

Most ministry dogs greet you at the door when you walk in, then sit behind the altar during mass. Other dogs are like "Carny," a French poodle we read about in New Hampshire. He actually prowls the pews during service, and curls up with the congregants. Pastor Kelly Harvell says he always knows where Carny is, because he sees people's faces "light up".

And he says Carny has a knack for knowing who needs him most, because he tends to visit people who are struggling in some way - and makes them feel better.

Some ministry dogs also have special training. For example: "Tiger" is a Labrador retriever who was originally trained to be a service dog for people with special needs. But when she didn't quite make the cut for that, her training made her perfect for church duty. She now visits three Methodist churches in Maine, where she often opens doors for people, and even switches lights on and off.

She also hangs out in the confession booth, and visits ailing congregants in the hospital. What do church-goers think of mingling God with dogs? Father Roy Snipes is a pastor in Texas who brings five ministry dogs to church each week. He says people rarely complain, but if they do, he reminds them that Jesus was born surrounded by animals! And if they don't like it, he gently encourages them to find another church.