Cats Can Get Us to Do Anything They Want 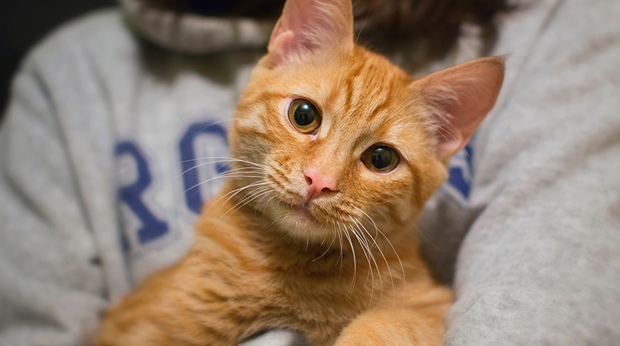 We told you recently how cats manipulate us with a certain type of “meow” – they use it to con us out of food and attention. Well, it doesn’t end there. It seems that catscan get us to do anything they want! Take Dena Harris of Madison, North Carolina. She endures daily nagging from her 8-year-old cat, Olivia, who taps her on the shoulder early each morning until she gets up and feeds her. Cecile Moore of Athens, Georgia put up with acts of blackmail from her cat Henry who - when he was alive - would sit on the top of her bureau and scoot a bottle of perfume toward the edge until she got out of bed.

Kim Campbell Thornton is an MSNBC contributor and past president of the Cat Writers Association. She says that while we’d never tolerate that kind of behavior from a house guest, or even our kids, we take it from cats. Not to mention their extreme independence, their refusal to show affection except on their own terms, and their frequent shedding. We give, they take, and yet we adore, feed and house them, and constantly try to please these little creatures. So the question is: what does that say about us?

Dr. Lois Abrams is a therapist with the American Association for Marriage and Family Therapy in California. She also specializes in Animal Assisted Therapy. Both Abrams and her dog Duke are certified by Therapy Dogs International – so she knows a thing or two about both animal and human behavior. She says that when it comes to cats, we’re driven by two competing emotions: the desire to nurture a small, dependent animal - and the challenge presented by a cat’s independence. Once we’ve gained the approval of a cat – which is 100% the cat’s decision – we feel proud. Abram’s calls it the “Sally Field syndrome” as in, “You like me! You really like me!” So, when a cat decides that it “likes” us, we keep doing whatever it takes to please them, and stay in their good graces. We are totally and completely at their mercy.