Intelligence For Your Life - Are You Buying Junk Food Disguised As Healthy Food?

Are You Buying Junk Food Disguised As Healthy Food?

You may think you’re eating right, but some healthy-sounding food is just junk food in disguise. So, here are the foods to avoid. 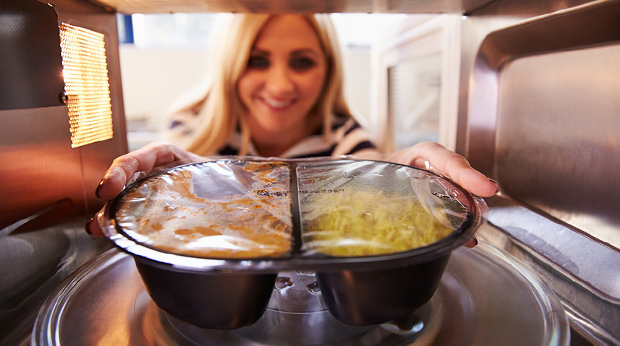 You may think you’re eating right, but some healthy-sounding food is just junk food in disguise. So, here are the foods to avoid:

#1: Sushi rolls. Veggies and seaweed are low-cal – but a lot of popular rolls – like spicy tuna - are slathered with sauces made with mayo or cream cheese.  And the fish is often deep fried. The average sushi roll clocks in at 550 calories – the same as a Big Mac.

Then there’s half-and-half. You put so little in your coffee, it seems harmless – especially compared to full-fat cream. But adding just a few spoonfuls to your 3-cup-a-day coffee habit can turn into 200 calories – and as much fat as a big pat of butter!

Another surprising calorie bomb: Dried fruit. Cup for cup, dried fruit has 7 times more calories than the fresh kind, because dehydrated fruit is calorie dense. For example, fresh grapes are 60 calories a cup, but a cup of raisins is 460. The same as a Taco Bell Chicken Fajita Wrap.

What else sounds healthier than it is? Diet microwave meals. They may be lean and ready-to-eat, but they’re also packed with sodium.  That’s because manufacturers can’t rely on calorie-rich fat to make it taste good. But too much salt raises your blood pressure, and makes you retain a lot of water. A better bet: Grilled chicken breast and veggies.